Warranted in 1890 under the English Constitution, in the historic city of Madurai, Lodge Pandyan has been witness to more than a century of history. The Lodge has been witness to a tumultuous Twentieth Century, which saw two World Wars, and the historic Declaration of Indian Independence. The Lodge was part of those historic moments which marked the formation of the Grand Lodge of India, to which we moved in the year 1961.

The Masonic Temple, built in pre-Independent India in 1939, reverberates with historical significance. The Temple has been graced by the visit of eminent and legendary Masons, whose inspiration and deeds have left an indelible mark in the minds of the Masonic Fraternity. 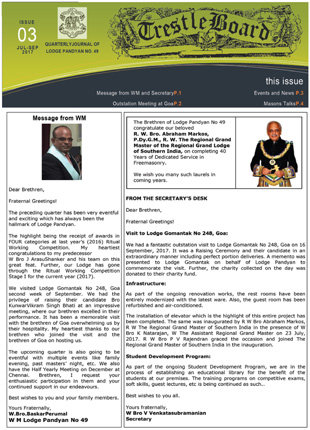